Boatshed
Jeanne Socrates and her journey around the World - part 1
Monday, 07 November 2016

Jeanne Socrates and her journey around the World - part 1

Friend of Boatshed, Jeanne Socrates has already cast off on her 3rd attempt to sail around the world non stop and single handed - although the last two weeks haven't been easy going and she has had to retrace steps for some urgent repairs.

Jeanne has long been a friend of Boatshed, and we were extremely fortunate to spend a lot of time with her at Southampton Boat show this past September. If you haven't come across Jeanne before then why not take a moment to read an earlier blog we wrote so that you can catch up!

Before departing Jeanne had taken part in quite a number of interviews in the press and on TV. Her story is pretty amazing, at 74 years young (and trust me Jeanne could run rings around me!) Jeanne is circumnavigating the world - she is doing this non stop and single handed. If you would like to see some of the press, please click here to see it on her blog and here to see her Facebook page.

Pretty much as soon as Jeanne left Victoria the weather started to turn for the worse and she encountered 40-50 knot winds and seas of 6-8 feet.

On October 24th The barometer has started dropping and Jeanne was preparing Nereida for an incoming storm.

"I have prepared the boat as best I can for the blow... sealed the washboard and front windscreen opening window with duct tape and Gorilla tape to try to prevent water getting in....."

Jeanne has deployed Nereida's drogue and is prepared for rough weather. There is a deep low to the south heading their way with winds of 50 - 60 knots forecast.

"I checked all lines are secured and came down below. So now it's a waiting game.... I can hear the wind howling outside as we move to waves - a fairly gentle motion at present."

The bad weather damaged Nereida's drogue and staysail (see below) and a broken furling line.

On October 26th, Jeanne took the decision to return to Victoria to fix the damage that the storm has inflicted on Nereida.

On October 29th Jeanne stepped onto dry land with a shopping list of jobs to do to get herself and Nereida suitable to set sail again as soon as the weather allows. We are happy to hear that she is safe and sound on dry land and look forward to when she sets sail again.

If you wish to keep track of Jeanne's progress then follow her blog here. 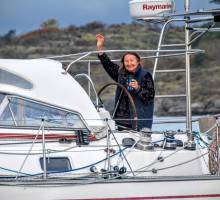 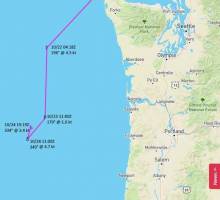 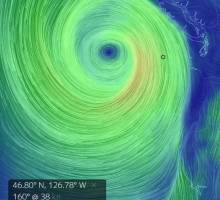 This picture provided by Paul Elliott gives an appreciation of the conditions that Nereida has been fighting through. 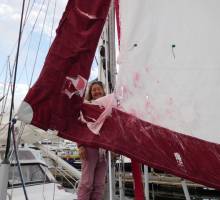 Lots of interest in damaged staysail (picture from Jeanne's blog)