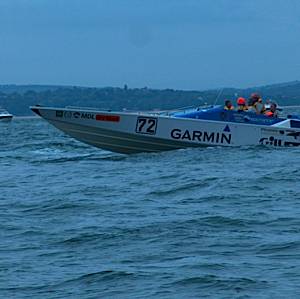 Boatshed Hamble was out with Boatshed Sussex and other Boatshed supporters this weekend for the start of the Round Britain Offshore Powerboat Race in the trusty Boatshed Hamble RIB. Brothers Peter & Michael Delbridge from Boatshed Hamble joked about joining in as the RIB is faster than about a third of the entries in the race.

The guys dropped anchor between Southsea pier and the castle close to the shore which put them right on the run-up to the start line (literally about 5 metres from the closest boat when they passed). The first leg of the race is Portsmouth - Plymouth with the race finishing on the 30th June.

Portsmouth Harbour Police popped by to say hello to Boatshed and ended up moored alongside talking all things boats as they realised that Boatshed Hamble had once again chosen the best vantage spot.

Boatshed Hamble was looking forward to cheering on "Going Lean" - a Sunseeker XS2000 which they sold to Dean Gibbs especially to enter this event. Dean and fellow driver Neil Holmes and navigator Shelly Jory finished 3rd at the end of the 1st leg in their class averaging 39.95 knots for 130 nautical miles from Southsea to Plymouth with a time of 3hrs 15min 16 sec. Well done guys - keep it up.

Of the 47 boats that started not all faired so well, with one boat managing to hit the second World War anti submarine barrier off Southsea before the start (should have looked at a chart chaps....)

Another boat sprung a serious leak going across Lyme Bay and the crew had to take to the life raft before the vessel sank. Also, BBC presenters James May (Top Gear) and Nick Knowles (Changing Rooms) struggled to cross the start in their boat and eventually limped into Hamble before trying again later in the day. Should have come to Boatshed Hamble - they would have sold them a vessel capable of the job and shown them up to 70 photos of it before they bought!

Boatshed Hamble will be back out on the finishing line when they return, so look out for that bright yellow RIB flying a very large Boatshed Hamble flag.

The 2008 Round Britain Offshore Powerboat Race 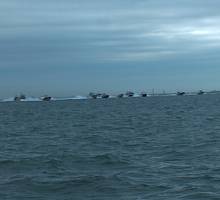 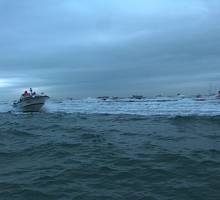 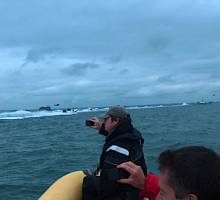 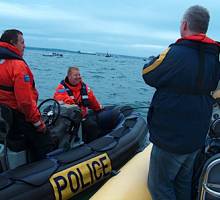 Even the police love a chin wag with Boatshed