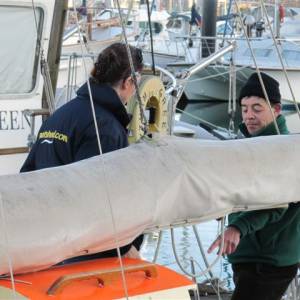 Mandy Chapman of Boatshed.com talking to Gus Davidson. The orange hatch top is proving to be exceptionally visible, Gus was buzzed twice during a recent channel crossing by planes

The Jester Challenge has its supporters and critics, but whatever you think about it it’s certainly becoming a firm fixture on the sailing calendar. The 2010 event which leaves from off Plymouth Breakwater at 13:00 BST on 23rd May already has 93 entries. Boats are less than 30 feet but the current list is an incredibly fascinating and varied mix of boats and people.
One such sailor is Gus Davidson who are taking part in the challenge in his boat Just Right in order to raise money and awareness for Macmillan Cancer support. Raising money is their main aim although there will undoubtedly be some adventure along the way .

The Boat
Just right is a Golant Gaffer built by Gus his family and friends. She is 20' length overall, has a 17’9” waterline length and 7’ beam. She cost around £14,000 pounds to build and took approximately 1,400 man hours, 1,100 of which Gus put in himself. A transatlantic crossing was always in mind so when first built many of the fixtures and materials were “beefed up” to take the continuous stresses and strains which such a voyage would put on the boat.

The boat was first launched in 2000 and Gus has been sailing her since then, gradually trying her in different conditions and with different sail plans and equipment. Her designed has evolved over that time and all equipment has been tried and tested in exacting conditions to ensure that when the time comes there are as few surprises as possible crossing the Atlantic.

Just right performs best on a broad reach or run. She can muster an impressive 7 to 9 knots with a quartering sea as her long keel gives her the directional stability to cope with this and maintain good boat speed. Gus has tried a Parasail and believes that this will work well on the Jester Challenge as the boat goes well with this sail and is relatively easy to handle.

The interior of the boat is really very cosy and amazingly seaworthy. In a space this small then everything has to have its place and purpose or preferably more than one purpose. The handholds have all been added to suit Gus and where he needs them. After hitting some wood mid channel and being knocked down Gus has fitted padding next to the seat he uses at sea to reduce the risk of bruising himself. Gus has given himself full standing headroom by adding a raised hatchway, he can stand here to steer the boat in storm conditions. On his trial 6 days sailing he wore his running clothes, shorts and vest as he was on deck very little and if he did go out could quickly towel himself off and not bring wet gear into the cabin. There is no loo onboard apart from a bucket and a bailer! But the electronics are far from simple. Gus has meticulously calculated energy consumption, communication options, safety procedures and the sourcing of weather information to ensure that he can manage on the Atlantic crossing with 1 hours battery charging by the engine each day.

Gus is married, he has 3 daughters and his first grandchild is due in April in time to see Grandpa before he sets off across the pond. Gus is no stranger to sailing or fund raising through grueling challenges and this is obviously no mid life crisis. He isn’t a loon or a hero but just a really nice ordinary chap with an amazing vision and determination to succeed. Gus has previously raised money for charity through long distance running events and has been sailing all his life, large amounts of it single handed.
He started out in a 9’ pram dinghy going off for adventures with the family dog and he’s also been building boats for quite a while, his first being a mirror dinghy whilst he was still at school. But he has never wanted to move onto the bigger boats and enjoys the simple pleasures that small boat sailing gives and the enormous gratification of completing a challenge.

Gus is not at all daunted by sailing across the Atlantic in the Jester Challenge. He wants to sail the boat as best she can be sailed but his final place in the rankings is of no importance. The one thing that does daunt Gus is raising money for charity. The Macmillan cancer support charity is right behind Gus and is hoping that he can raise around £100,000 for the charity. Gus is seeking both commercial sponsors and individual donations to help meet this target.

Macmillan Cancer Support provides help, advice information and support to people suffering from cancer and their carers, family and friends. Right now that must include almost everyone of us, I think we all know someone who has had cancer or whose close relation has and making life a little bit easier for them has surely crossed most of our minds at some stage.

To find out more about Gus' Jester challenge visit his website 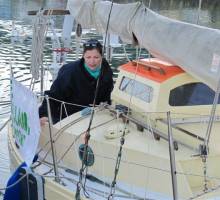 The small but very safe companionway 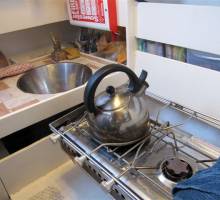 The galley is compact and importantly safe to use at sea 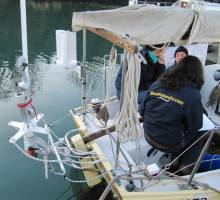 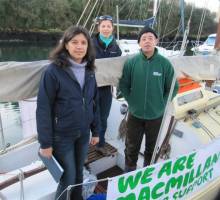