What is a trawler ? We ask Gary at Boatshed Seattle.....

NEIL: So, I’m here with Gary from Boatshed Seattle and Waterline Boats. Gary, what kind of boat do you want to talk about today? I mean you have some experience of sailing boats and trawlers.

NEIL: Tell me about trawlers, because that’s a subject in that, certainly in Europe we’re not familiar with, what is a trawler? I suppose that people think it’s like a fishing boat?

GARY: Well, it’s where the term came from. The idea that you have a, kind of, a utility designed vessel with a bunch of poles sticking out of it and it’s trailing nets and fishing gear. That’s where the term, “trawler” came from, so when they decided to make those into recreational vessels, they sort of maintained the similar looks, they tend to be fairly slow moving boats, relatively.

NEIL: So, it is a recreational vessel. Obviously, they’re very popular over here and the Pacific North West, but tell me a little bit about the design and what to expect from a trawler?

NEIL: Nice analogy, Okay, so floating log, what does that give you in terms of a boat?

GARY: Well, they tend to be very stable because much of the boat is deeper in the water. They’re not affected by the nuances of smaller waves so much, so they’re very stable platforms.

NEIL: You know, you say it’s leisure, I mean are these things big, small, all sorts of different sizes? Can we sleep on it? Can we live on it?

GARY: They are all different sizes, yeah you can sleep on them.

NEIL: So, they’re based on a traditional fishing boat hull, if you like, but they’re fitted out like a normal… I mean are they luxurious?

GARY: They can be very spartan or they can be massively luxurious, based only on what your budget is. 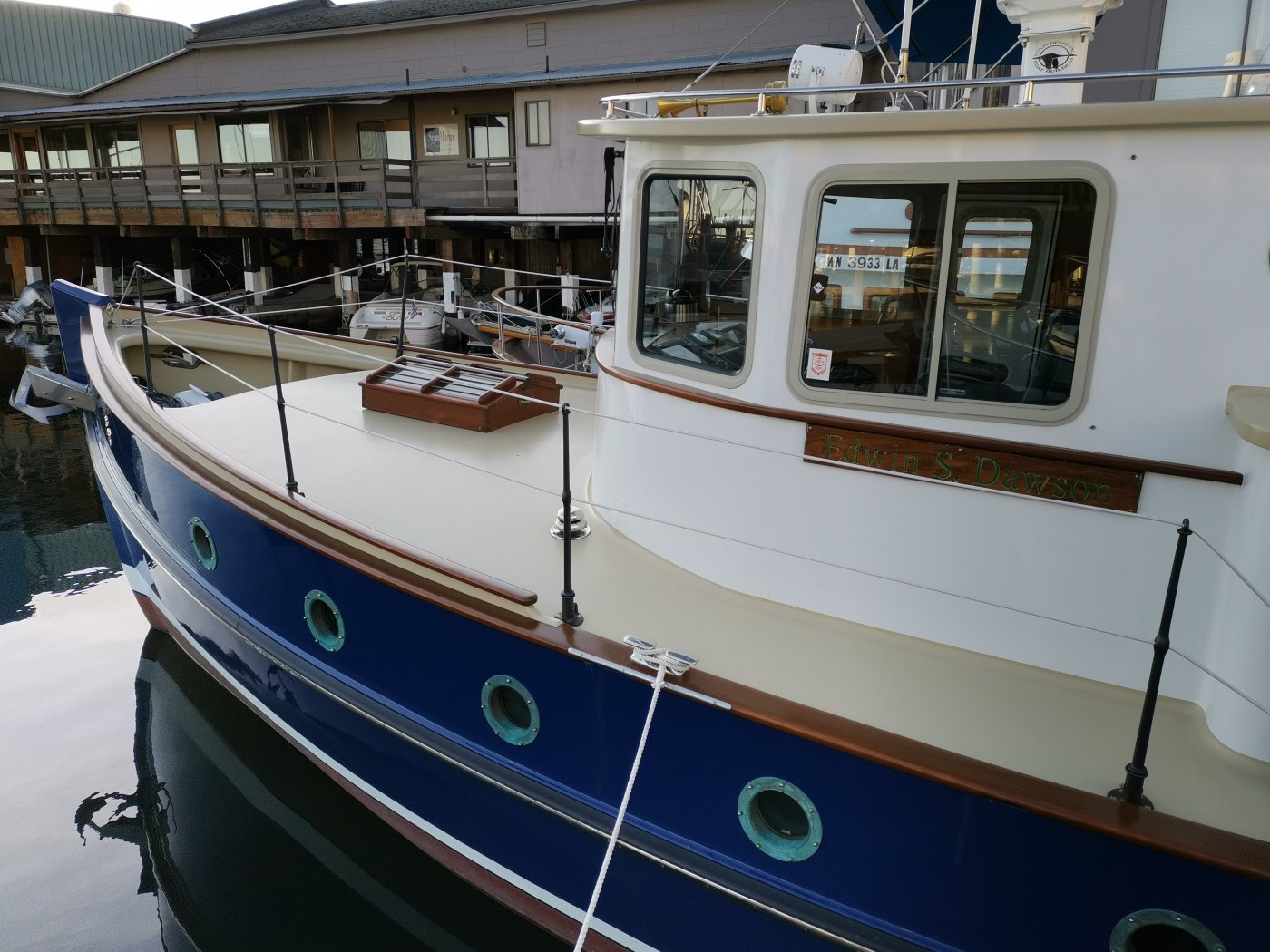 NEIL: Obviously, you have a selection of all sorts of different types here. If you could pick one in particular trawler and say, “This is my favourite brand and model,” what would it be?

GARY: This is the perfect boat?

GARY: It would be a 65ft Fleming. I mean, they’re beautiful, they’re luxurious.

NEIL: What sort of money do those cost?

GARY: Well, there’s numerous brands and models, probably the most well known here in the north west and America would be American Tug, Nordic Tug, Helmsman Trawler, Selene, that kind of product line.

NEIL: Okay, and in terms of… what would be the typical use for these, you know, kind of a weekend away, week away, live aboard?

GARY: Probably all of the above.

GARY: I have a 42ft trawler and I’ve spent three weeks on it and I've spent overnight on it. It just depends what your available time is and how far you want to go. They’re generally equipped to be able to spend any amount of time on them that you want to spend on them, they’ll have multiple cabins, complete galleys, often times more than one head, with showers, so they have all of the amenities.

NEIL: Tell me a little bit about the performance. You mentioned that there’s a lot of this trawler in the water. Obviously, that means it’s going to be a little bit slower, but you talked about sea keeping this comfortable. What kind of speed would you expect?

GARY: I think probably general, and this is a very general idea, people think of trawlers speeds as eight to ten knots, but there are trawlers that will do 18 knots and some that, at best, will do eight or nine.

NEIL: Right. I mean, compared to a sailboat that might do five or six knots, ten knots is a respectable speed.

NEIL: What about economy?

GARY: Well, economy is very important to most people, but everybody gauges that somewhat differently. A person that has a fat bank account, economy to them might mean a willingness to spend $20,000 a year on fuel, but a person who is still working for a living, a blue collar type of person, economy to them might mean they don’t want to spend over $1,000 a year on fuel and still use their boats regularly.

NEIL: But how much fuel is it going to be using while we’re travelling along?

GARY: Well that varies completely with how many engines the boat has, how big the boat is. I have a boat that has 135 horsepower engine and I can run at seven knots at about two gallons an hour, but there’s a fair amount of boats out there that three, four, five, six gallons an hour is more common to them, depending upon if they’re twin engine or single engine boats.

GARY: It doesn’t sound like a lot of power, but the boat was manufactured in 1987 with a single 135 horsepower diesel, 42ft long.

NEIL: And it pushes it along nicely at seven knots?

GARY: Maximum speed on the boat is nine knots.

GARY: I don’t think so because modern engines are extremely efficient and when you add that to the fact that almost all of our cruising would be considered coastal cruising with multiple cities, within long distances, everybody has cell phones, everybody has electronic navigation equipment on board their boats. There’s vessel assist everywhere you go within an hour or so away from your location. The idea that you need two engines or fearfully needing to escape weather conditions, therefore, I want to go fast. I want a boat that will make, you know, escape a storm. There’s so many ways to plan your trips today, so much available information, that to me it just seems like an unnecessary expense to own a boat with twin engines.

NEIL: I read somewhere that somewhere in the region of 97 or 98 percent of engine problems on boats are related to fuel, so that kind of indicates that it doesn’t matter whether you have two engines or ten engines, if it’s a fuel problem you’re going to be in a mess.

NEIL: And a boat like yours, Gary, and Art, if I was coming to you as a broker and saying, “Look, can you source me a boat like that?” I realise there’s a whole range depending on how old the boats are, but what kind of money do you think people have got to have to purchase a boat like that?

GARY: Boy, everybody you talk to has a different budget, it’s like asking people, “How much do you have in your bank account?” I always ask people, when we’re doing some search for a boat, what their budget is, and I don’t think I've heard the same answer from two people in ten years of selling boats.

NEIL: A range of prices, you know, if I was looking for a 30 to 40ft trawler, what would be, kind of, the cheapest that I could pick one up for?

NEIL: Okay, all right, anyway listen Gary, you’ve got the phone coming in so thank you very much for your time. 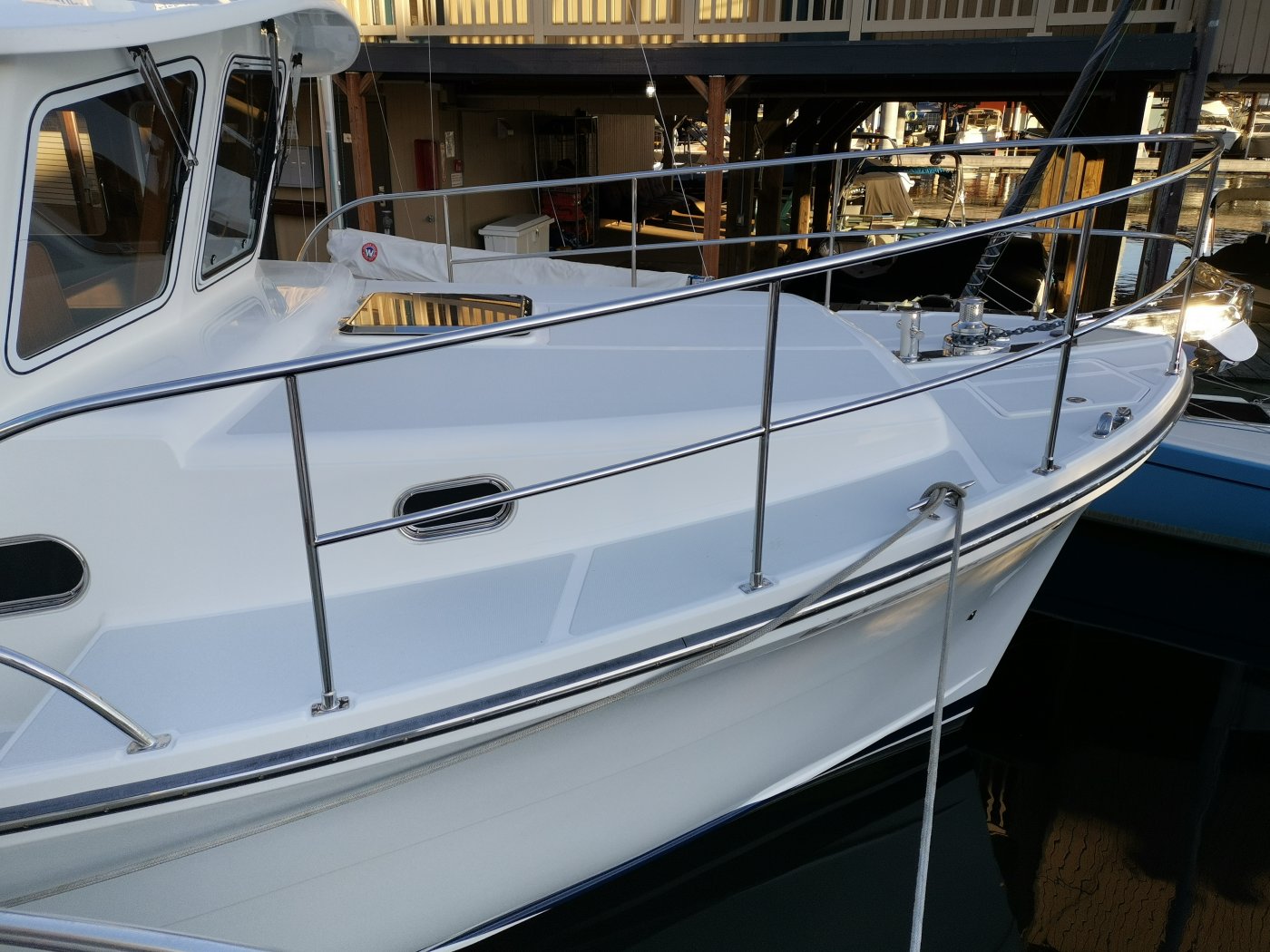